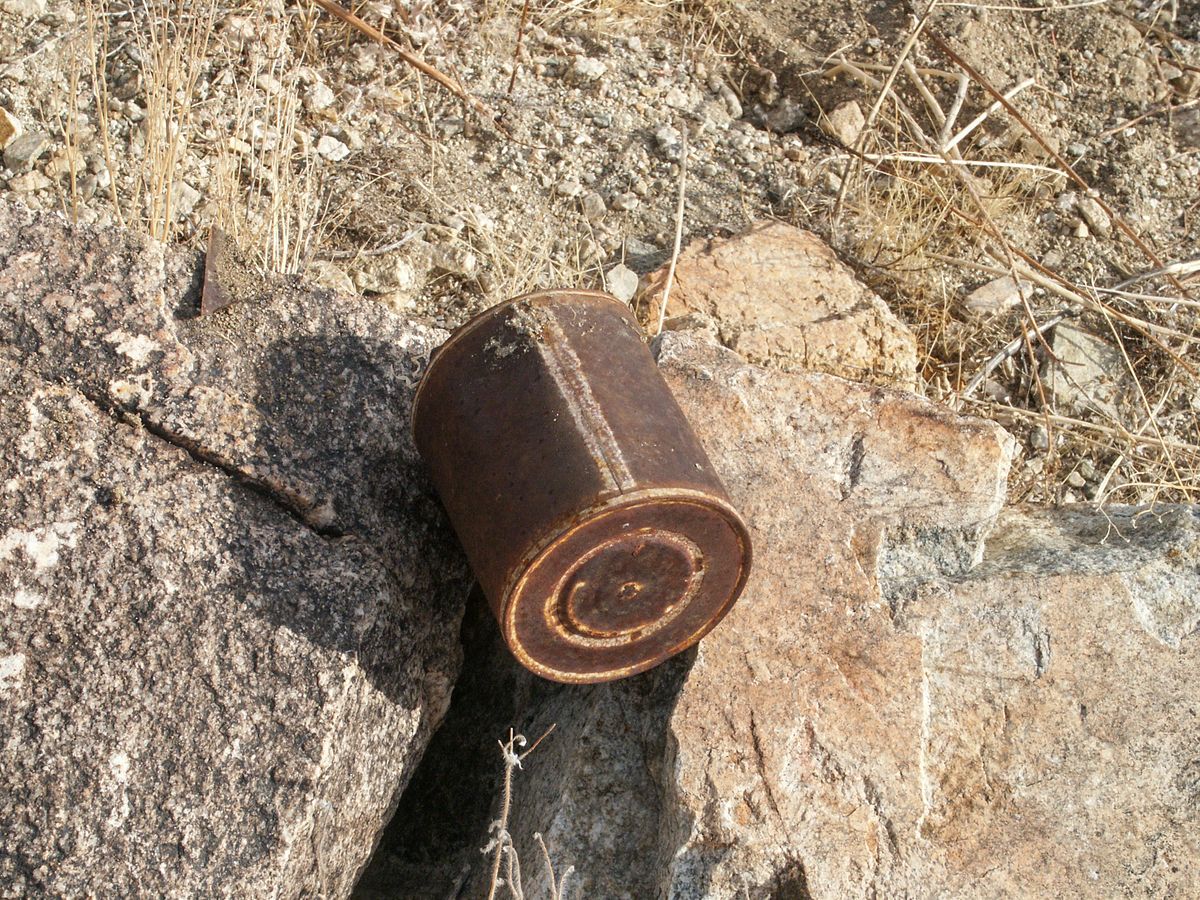 Food cans are widely overlooked as a good indicator of when a historical site was inhabited. And often they are the only things left. What follows below is a basic guide.

The earliest cans have solder on all of their seams and are of the so-called "Hole-and-Cap" design. Food was put in through the hole and a cap was added and sealed with solder. These first cans were modified in 1825 to the "Hole-in-Cap" style, where a center vent hole was added to the cap.

After the food was added to the can, the cap was put on and the can was heated. The can vented while being heated through the hole which was then sealed with a dab of solder. Bacteria was unknown at the time and the air itself was thought to cause food to spoil. Unfortunately, the terms Hole-and-Cap and Hole-in-Cap are sometimes confused with each other and used interchangeably. The difference is the center vent hole in the cap. Hole-and-Cap designs lack a soldered center hole. Hole-and-Cap cans are also understandably rare since they are so old. I don't think I've seen one in the wild.

Canned food in America became widespread with the 1849 Gold Rush to California. Miners came west and increasingly needed to rely on canned food as they prospected deeper into the wilderness of the Sierra Nevada and beyond. In the 1850s, Louis Pasteur discovered that bacteria caused food spoilage. This insight reduced the amount of spoiled food in the can designs to come. Gail Borden first patented condensed milk in 1856. In that same year, Henry Bessmer of England, and William Kelley in the United States, both discovered the process to convert cast iron into steel. This allowed less expensive cans to be produced. And in 1859, a locking side seam for cans was invented, which further helped against spoilage.

The food demands of the Civil War (1861 to 1865) greatly spurred technological innovations in machinery which increased can production. The U.S. Government was purchasing enormous amounts of Borden’s condensed milk for the Union army. And in 1866, the first key-wind-opened sardine cans were produced. 1883 saw the first machines capable of soldering the side seams of the cans, increasing can production.

Evaporated milk was first canned in the U.S. in 1885 by the Helvetia Milk Condensing Company using the new Hole-in-Top design. This can was filled and vented through a small vent hole in the top of the can and lacked a cap. These cans are short and opened by punching two distinctive holes on opposite sides of the lid. Max Ams developed a double-side seam for cans in 1888 helping to make the cans air-tight (but they were still soldered).

1904 brought an important series of innovations to canning; the Sanitary Can Company was founded. Their cans had "Open Top" lids that were crimped on the can without the need for the Hole-in-Cap style top. For the first time, no solder is visible anywhere on the can and they are made completely by machines. The Open Top cans also have the advantage of being fully open for filling at the factory and air-tight after heated and sealed. The name "Sanitary" is embossed on the lids but the name only lasts until 1908 when the company was absorbed by the American Can Company; the new Open Top style remains, however. The modern cans we have today are close variants of this style.

Another type of can you might see at an old mine camp is a tobacco can. Chewing tobacco began to fall out of favor in the 1910s as unsanitary and helped give rise to cigarettes. The deadly 1918 Spanish flu pandemic brought the practice of spitting to the forefront of society and hastened the removal of spittoons from all public places, including saloons. Spitting on floors or sidewalks was not only frowned upon but illegal in many places. Because of this, chewing tobacco cans are more likely to date from before the 1920s.

(Years are as close as possible and are approximate, there was overlap)

An in-depth guide to bottle dating is far beyond our scope here. It is an extensive topic with many exceptions and complexities! What follows is only a very simple guide to bottles in the American West.

Perhaps surprisingly, nails can also be useful for dating historic sites. The earliest nails are hand-wrought nails which were hand-made one at a time by a blacksmith from square iron rods. He would cut the nail to size, heat it in a forge, and work one end to a taper and point. They taper to a point on all sides. The head was created by pounding the other end in a “nail header”, which flattened out the end. These nails are rough and irregular and will show their handcraftsmanship.

As early as the 1790s, simple machines came into use to increase the production of nails. Cutting machines made square nails out of a rectangular iron bar. These nails have straight edges on all sides and taper on two sides to an end but without a point. Early square cut nails often have heads that are irregular from creation by hammer strike. After around 1830, these nail heads are machine-made and become more uniform. Square cut nails are still made today but only for specialty uses and in low quantities.

In the 1890s, steel came into mass production using the Bessemer process. The steel wire nails that are common today quickly came into dominance. By 1895, more than 75% of nails produced in the U.S. were wire nails.

Here is a basic summary of the chronology of nails: