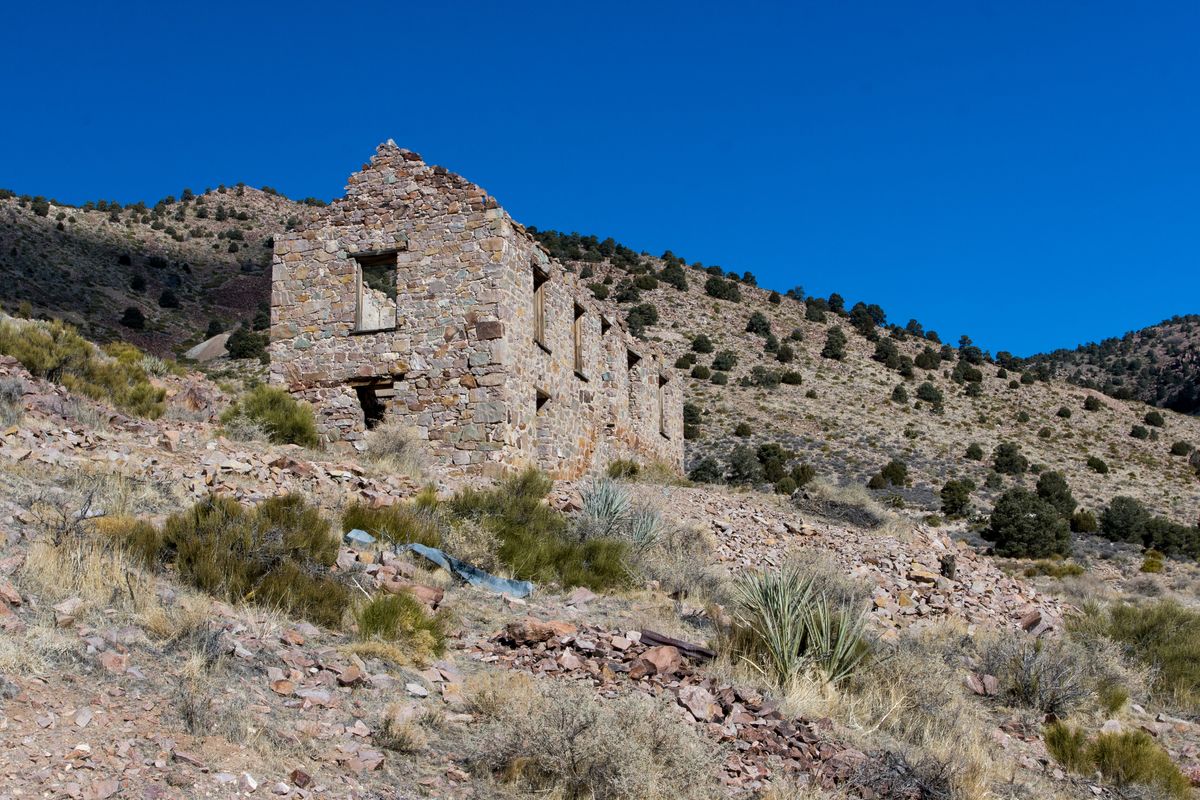 The mining camp of Delamar started out as a small tent camp similar to Helene just a few miles to the north and only a few months later. It was centered around the April Fool, Monitor, Gold Cup, Hog Pen and a few other small mines. Captain Joseph De Lamar heard of the strike and came down from Montana to purchase most of the claims in 1894 for $150,000. He consolidated the mines into the Delamar Mine and a town quickly spread out just below the mine.

In 1895, a fifty ton mill with a chlorinating process plant was built to work the silver and gold ore. It wasn’t satisfactory, however and it was switched over to a new cyanide process, one of the earliest in Nevada. This new treatment process did well and a second cyanide plant was added two years later.

By 1897, the town had hundreds of buildings with more than 3,000 residents. It was one of the biggest towns in southern Nevada at the time, boasting general stores, lodging, saloons, restaurants, stables, a school, and two churches. A post office and newspaper opened that same year. In 1899, they built a opera house complete with a brass band.

The mine was a rich one and quickly became the largest in the state, a title it held for many years. It had produced over $8,500,000 of low-grade silver and gold by 1902.

A fire started in a stable and destroyed much of the south side of town in 1900. Delamar didn’t have much water and there is a story of the townsfolk blowing up buildings with dynamite to stop the fire from spreading. The town rebuilt soon after and recovered.

Water was indeed hard to come by though; the town never had enough. At first, water was hauled in on wagons by the barrel. Eventually, a three inch pipeline was put in over to Meadow Valley Wash; some twelve miles away. This meant pumping it over the top of the Delamar Mountains and required three wood-fired pumping plants. The lack of water meant that much of the drilling and crushing of the rock was done dry. (The veins follow rhyolitic dike intrusions in Prospect Mountain Quartzite.) This produced a particularly fine dust that was everywhere in the mine and in the air around the mill. After many years of breathing “Delamar dust”, the miners discovered that it caused silicosis, a fatal lung disease. The mine became known as the “Widowmaker”. Hundreds of men came down with the coughing disease and died early deaths. The mining town has two cemeteries.

Captain De Lamar sold his interest in the mines in 1902 to East Coast investors who formed a new company: the Bramberger-Delamar Mining Company. The mine produced another $3,000,000 for them before closing in 1909. It was briefly worked again in the 1930s but that was mostly to re-work the old tailings.

These days, not much is left of the old ghost town; only a few stone walls and foundations remain. On more than one occasion, I have seen wild horses hanging around the townsite. Are they the descendants of the original miner’s horses? Could be.

Delamar makes a great place to camp and explore but please remember this is private property. Please respect the area, leave everything you find and obey any no trespassing signs or current mining activity.