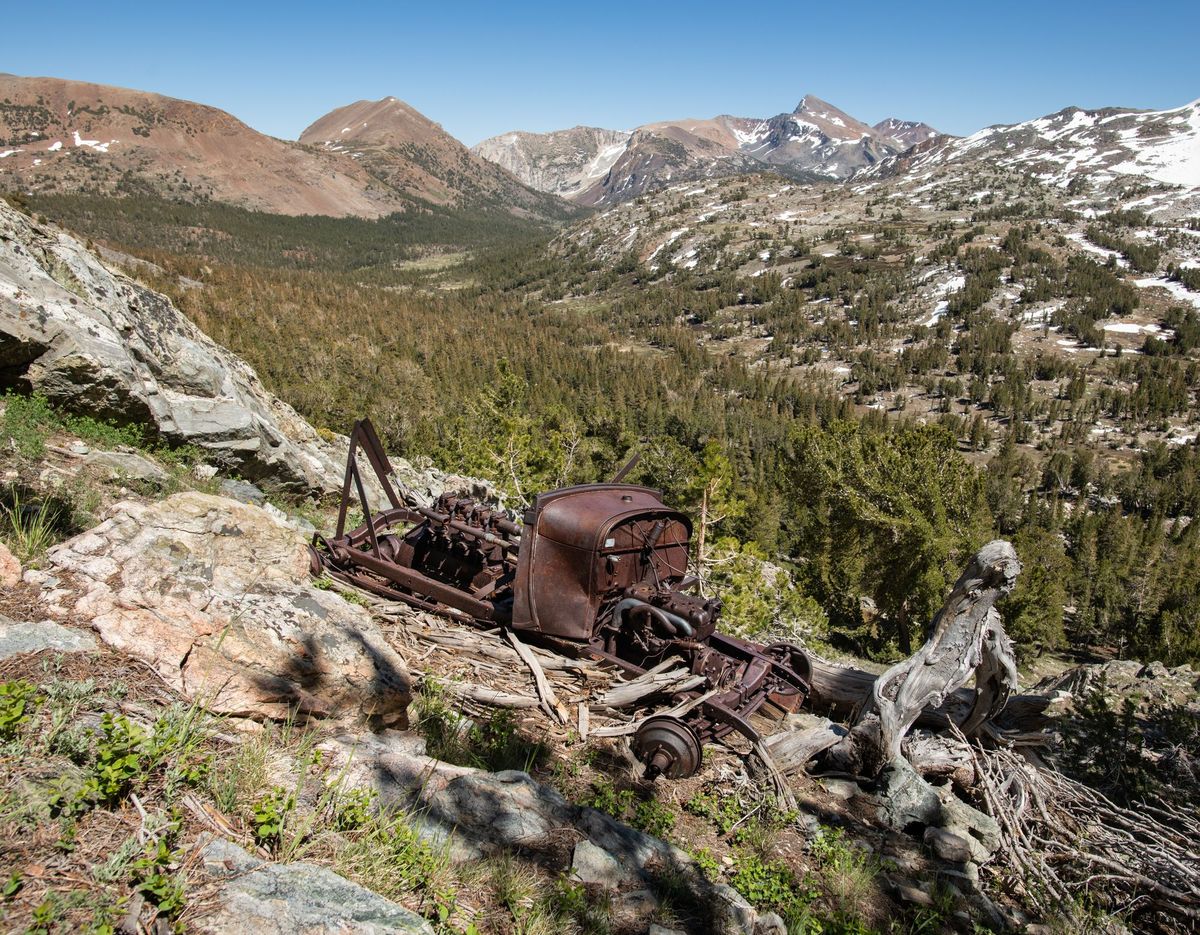 Not far from the Tioga Pass entrance station to Yosemite National Park lie the remains of the Hess Mine, one of the more accessible 1940s-era tungsten mines in the High Sierra. Three widely-separated claims comprised the mine: the main claim at the north end of Steelhead Lake; a small middle claim above the west shore of Wasco Lake; and an even smaller claim on the large ridge just west of Saddlebag Lake. Steelhead and Wasco Lakes are nestled in the Twenty Lakes Basin, a beautiful high-elevation bowl surrounded by 12,000-foot peaks, just outside the eastern Yosemite boundary. The Hess Mine produced only limited quantities of low-grade tungsten ore, eventually closing in the early 1960s.

Today, little evidence of the mine remains at the main and middle claims, as all
equipment was removed and the adits were sealed when the mine was closed. (The Hess family donated a ventilation blower and large compressor to the Mono Basin History Museum in Lee Vining; both are now on display in the museum's yard.) Despite the lack of equipment at these two claims, the hike along the old mining road through Twenty Lakes Basin is well worth your time. In addition to being one of the most spectacular hikes anywhere in the Sierra Nevada Mountains, it is also one of the few hikes which accesses the Sierra high country without requiring a
climb of several thousand feet. (The hike begins at Saddlebag Lake Resort,
elevation 10,100 feet.)

Visiting all three claims of the Hess Mine could be done in one very long day, but doing two separate hikes is preferable. While the main and nearby middle claim can be visited in half a day, the more distant south claim is separated from the other two claims by a large and very challenging ridge, with no trail. Access to the south claim is much easier and safer via a separate trailhead, at Sawmill Walk-in Campground.

Both hikes feature stunning scenery, but only the hike to the south claim offers historical artifacts.

Along the trail to the south claim lies Carnegie Institute's Timberline Station, a now-closed research facility built in 1929. The Institute's Department of Plant Biology at Stanford University conducted high-elevation plant research studies there until the early 1970s. A small tree plantation, a cabin, and a bunkhouse remain today. Bring a flashlight if you want to explore the dark interior of the cabin, which is just off the trail.

At the south claim, the mine appears to be a small open cut or collapsed adit, with little evidence of mining remaining. However, a very unusual piece of mining equipment, in a stunning setting, is the reward for a bit of off-trail climbing and searching. Resting high above the west end of Slate Creek Valley is a one-of-a-kind air compressor, once used to power pneumatic rock drills. A four-cylinder air compressor, as well as a large pressure tank, was welded onto the back of a Ford Model A, then somehow transported up the 30° slope.

Once at the air compressor, if you have a couple of hours to spare, it would be a shame to not continue to the top of the ridge. The ridge is quite steep until about 100 feet above the compressor, then the slope moderates significantly.  The rest of the climb to the 11,000-foot saddle at the top of the ridge is through a granite playground, with many unusual geological features and stunning views along the way. The view down into Twenty Lakes Basin from the saddle, by itself, is worth the effort.

Both of these hikes can be done from early summer to fall, depending on the amount of winter snowfall. Late June/early July is gorgeous, with lush green meadows and wildflowers, but the mosquitos are ferocious at that time. Residual snow after a wet winter may require waiting until mid-July, especially at the southern claim. Do not attempt either hike if thunderstorms are likely!