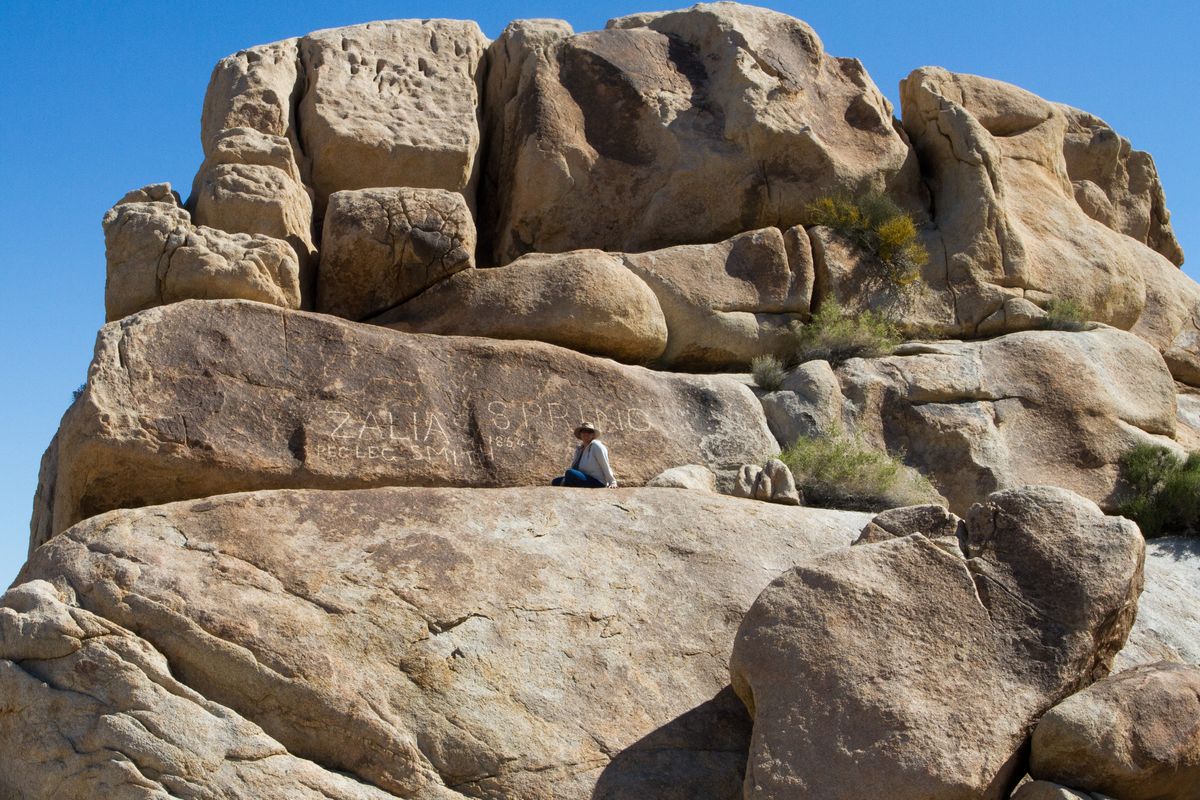 Sometimes in the desert, you can find what you are looking for.

It was already dark by the time we started our drive out into the desert. The sky was completely overcast and the wind was howling. And after a few hours of driving on the highway, it started to rain. Light at first and then heavy and constant. We weren’t exactly looking forward to getting into camp late at night in a heavy rain. But that is what we did. And after more than an hour of driving down rocky dirt roads and navigating across sandy washes, we spotted a faint light off in the murky distance. Minutes later, we rolled into our friend’s camp. They had gotten there earlier in the day and were wisely already hunkered down in their tent. We buckled down in our truck for the night. Wind and rain rocked the truck for hours and made for a restless sleep.

We didn’t drive all the way out here to discover Peg Leg Smith’s Lost Gold Mine (although, we wouldn’t be opposed to finding it), we were looking for his inscription.

Thomas "Peg Leg" Smith (b. 1801, d. 1866) was an outlaw, fur-trader, horse thief, and prospector. He spent his early years trapping throughout the West as a fur-trader. Then, during the 1830s and 40s, he joined forces with other outlaws and desperadoes such as Jim Beckwourth, Bill Williams, and Walkara (a Ute Indian) to operate one of the largest horse theft operations in history. After a decade of prosperous horse theft, the long arm of the law started to catch up with the rustlers. Peg Leg Smith turned his attention to gold prospecting.

Of course, the legend of Peg Leg’s lost gold is a famous one. Maybe even the most famous one of the local desert area. And although the tale has many variations, it always involves him roaming around the southern deserts of California where he stumbles across a pile of black-coated gold nuggets. They are either on top of or within sight of a hill composed of three small buttes. The exact location seems to have been lost to history.

We woke up the next morning to a crisp and beautiful day. There is nothing quite like the desert after it rains. It is a unique and invigorating smell. It was spectacular. We left our campsite and hiked up a sandy wash. Fresh bits of debris had washed into the creek bed overnight. It wasn’t long before we made our first discovery of the day: a few old Native American pottery sherds near the wash. Chemehuevi, Mohave, and Cahuilla roamed these hills long before Peg Leg Smith.

We continued on, and after crossing a few low hills, we headed for a small cluster of bushes. Clumps of vegetation usually mean water in the desert and this one marked a small spring. As we approached, we noticed a small rock shelter. We took a peek inside. The shelter was empty, except for a circle of rocks just out of sight. This is a tale-tell sign that it once held a clay pot, called an “olla”, used by Native Americans to cache water. We found a few pieces of pottery just outside the shelter as well. Further searching, revealed a single petroglyph on a nearby rock. This area was once a hotspot of Native American activity.

We left the shelter and after some searching and crossing another wash or two, we discovered our main target: Peg Leg Smith’s Inscription. High up on a granite ledge reads: “Zalia’s Springs. Peg Leg Smith. 1854”. Peg Leg is said to have named the spring for his daughter. It’s possible they lived out here for a few years in search of his lost gold. We climbed up the granite outcrop above the inscription to the top. Some say that if you stand at the inscription, you can see the spot where he found the legendary black gold nuggets. Maybe the top of the granite outcrop is the actual site where Peg Leg found the black nuggets in the first place? It does look like it could be in the shape of three small buttes…

Who knows if the legends of Peg Leg Smith’s lost gold are true or not. Many people think they are and have searched many years to find those lost nuggets. Some even have perished along the way. Just being out here, in this fabulous little corner of the desert, is reward enough for me.

Back in the winter of 2019, my friend JP and I took a hike to forgotten cabin on the northern end of the Old Woman Mountains out in the Mojave Desert of California. The cabin is inside of the Old Woman Wilderness but it isn't a hard hike. It makes
The Virginia May Mine (also known as the Horn Mine) had been on my "To Do" list for years. It was never a high priority, but its remoteness called to me. Located in the southern Turtle Mountains of California, it is out in the middle of nowhere and there is
We first visited the Surprise Tank Petroglyphs out in the Mojave Desert in 1998. We’ve stopped by a few times since then but didn’t really photograph the site again until 2009. We re-visited the site in 2013, 2018, and 2020. I wanted to get a few more photos