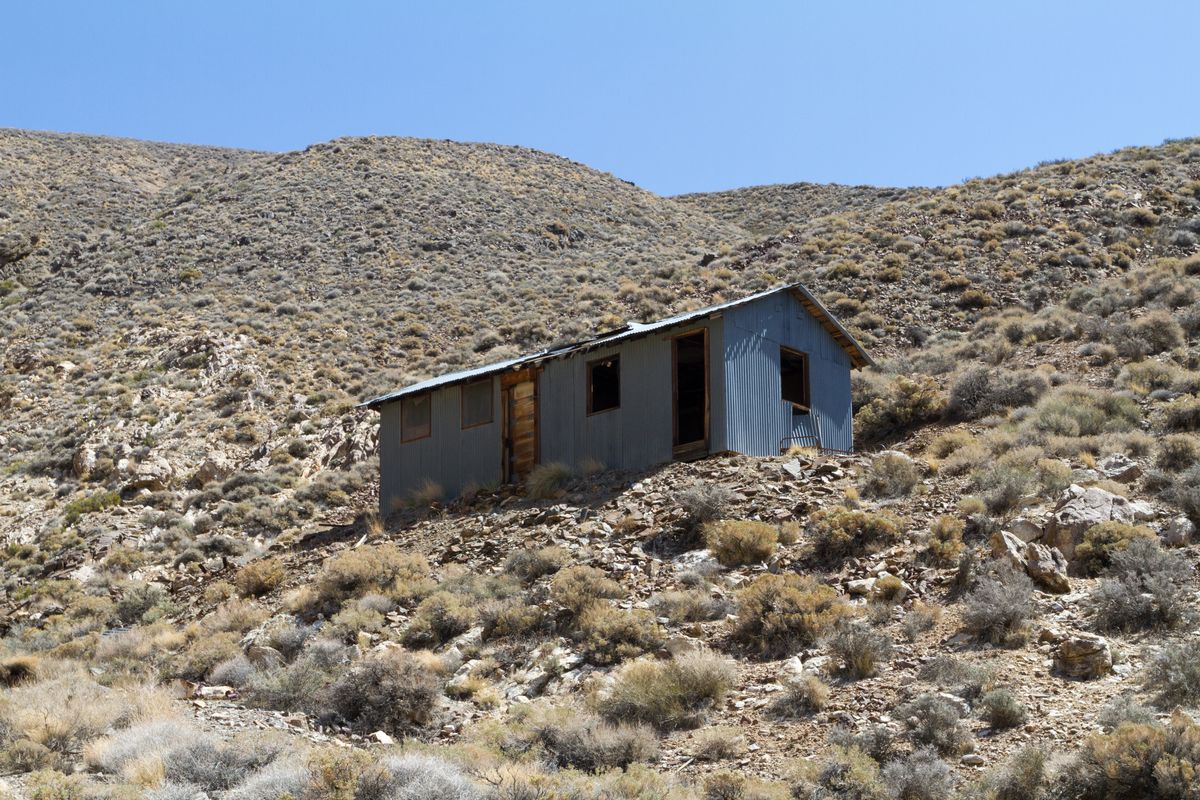 Dan and I started off a three-day trip into the Panamint and Death Valley region in 2013 by visiting an old miner’s cabin up in the hills.

After spending the night at one of our favorite places down in Panamint Valley, we drove up into the mountains and parked the truck along the road. We gathered up our gear, packed a lunch, and started our hike into the canyon. We knew we would be gone the rest of the day.

Heading up to the cabin was mostly uneventful. We followed the trace of an old trail through sagebrush and spotted old, discarded items along the way. The most intriguing was the remains of a canteen. One wonders whose thirst it quenched before some mishap broke it. It was tossed aside like so much of the trash of that era. Items like this are only of historical value now.

Up in the canyon, we were surprised to find an old USGS rain gauge. What was it doing way back here? Who knows. The instruments it used to measure rain in this arid land are long gone. Perhaps, they moved on to wetter pastures? We continued on.

As we finally got within sight of the cabin, we started poking around the area before going inside. I like to look for any old artifacts to help date the occupancy of the place. (I left everything I found, as you should too.) There were lots of old cans scattered about outside, but I didn’t see anything older than the 1930s Depression Era. This makes me think the cabin was built around then.

We opened up the door to the first room. It was a total mess! Years of abandonment allowed the mice to take over. What a letdown. I was disappointed. I began to think our long hike was for nothing. Half-heartedly, we walked over to the second door of this miner’s two-room apartment, expecting the find the same. Our spirits were quickly lifted however by the surprise of a nice well-kept room! The place had a spring bed, table, chairs, and shelves full of supplies. It was practically ready to be lived in again. Someone had been taking care of the place, but judging by the dust, I don’t think anyone had been there in a long time. I don’t think the place gets many visitors.

After taking a break and having some lunch, we went back outside and explored around. Above the cabin, we found a flat work area and some mining prospects. They were mostly caved, and from my research, I don’t think these mines ever amounted to much beyond coyote holes.

Back at the cabin, we took another break and sat for a bit, enjoying the desert silence and the long views of the valley below.  We started hiking back. It was a great day to be out, but we had to get back to camp and continue our journey tomorrow.

I’m not giving directions to this out of the way cabin but there are clues to find it if you are interested.