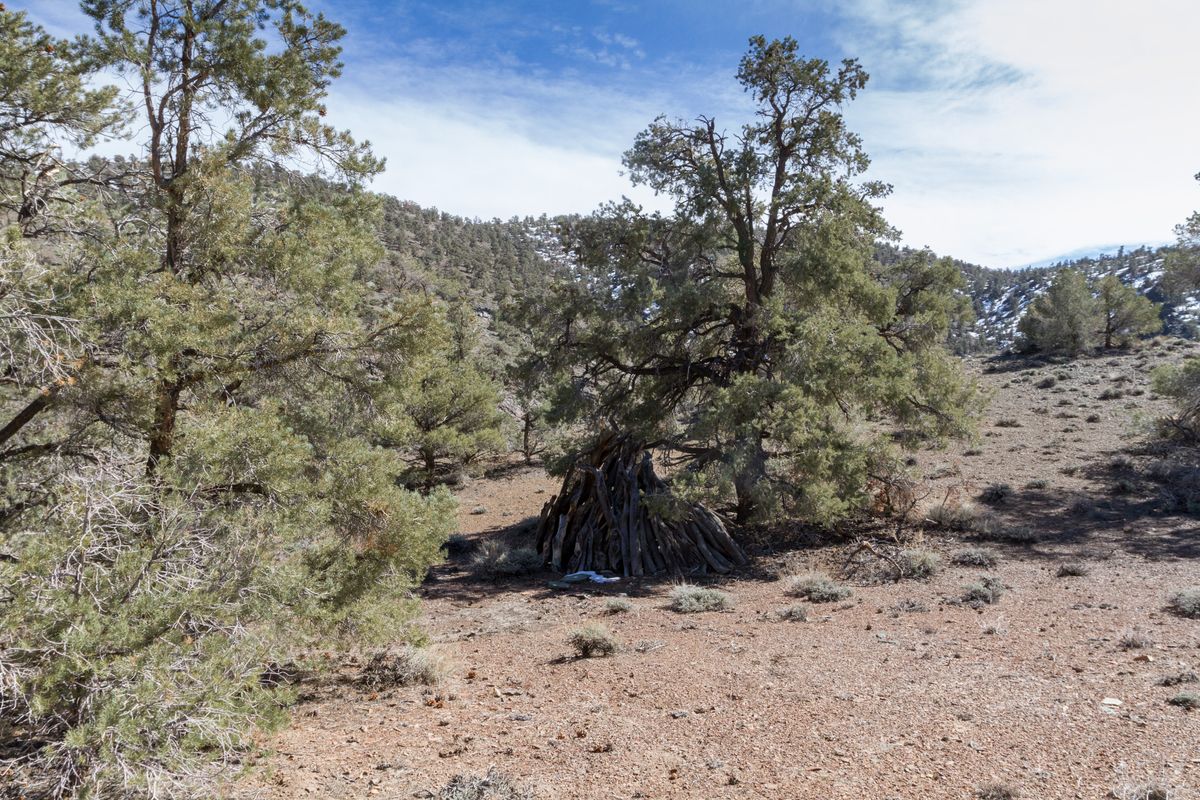 I had heard about a wickiup, high in the White Mountains, a while back and thought it would be an interesting find. The information I had didn’t give me the exact location and I really didn’t know if I would be even close (which is the case more often than not). But still thought I might have enough clues to track it down. This was not an area I had been to before, so after studying topo maps for a while I took a guess where it might be and planned my trip. If nothing else, it would be a nice hike in the pinyon pine forest.

After driving on some rough 4wd roads, I reached my trailhead. It was still early in the season; the air was crisp and there were a few snowbanks lingering on the ground. I packed up and started to hike uphill and cross-country. It wasn’t long before I came across a faint old trail. It was a surprise to find. As I wondered if it could be of native origin, I looked down and spotted an obsidian point. Not soon after, I crested a small saddle in the ridge. Here, in the middle of a small clearing of pinyon, sat a faint rock circle. What a nice find. Things were certainly going in the right direction! I had to be on the right track.

As I left the saddle, I lost sight of the old trail.  I made my way across the mountainside, over loose Cambrian limestone and shale rocks, dodging trees, brush, and the occasional snow patch. And after a few more miles over hill and dale, I saw a small clearing ahead.  This was my target search area.  When I finally reached the area, I slowed down and began looking around more carefully. Almost immediately, I found an old camp, it was historical. I spotted an old Hole-and-Cap style tin can with soldered side-seams. This type of can was among the first ever made. Seeing this doesn’t preclude a Native American presence, however, as in historical times they would often trade or work for canned foods. But this also meant the camp could have just belonged to an old mining prospector.

I was a little less confident now but continued my search. I wouldn’t have to wait for long though, I spotted something in the shade of a pinyon pine a few hundred feet away. It was a little house of pinyon.

The wickiup consisted of pinyon branches formed in the cone shape of a teepee. They probably once had their bark still on them and were covered by animal skins. A look inside the small structure showed that nothing remained. I checked around and couldn’t find any other artifacts other than an occasional flake. This surprised me. I expected to see at least a few more items here. I searched the rest of the flat. I came across a few more rock alignments, another rock circle, and the neck of a dark olive-green bottle. The lip on the bottle was hand-made and again was very old.

I took a break under a pine tree and had some lunch. This little camp had a nice view and a cool breeze. It was a pleasant spot. It would have been a hard life living here though. I’m guessing the wickiup was built by Western Shoshone, but it is possible the camp was inhabited much earlier as well.

On my way back to my truck, I startled a couple of mule deer. They dashed off, disappearing into the trees as quickly as they appeared. I thought about how that little camp was more likely used as a hunting camp and for gathering pine nuts than a permanent camp. This might explain the lack of artifacts I saw there or any other structures. Overall, it was a great hike to a neat and little-known site.

Also known as Macey’s Cabin and the Nelson Cabin, it was built for the Cerrussite Mine which it sits next to. It is a cozy little spot we’ve been visiting since 1999. J. F. Wasson staked a claim on the site on February 25, 1954.  The cabin probably
We found this small modern mill that seems often overlooked on Chidago Loop Road in the Benton Hills north of Bishop. The equipment is a mixture of new and old. It is nice to see so much of it still here. Hopefully, it remains that way. I couldn't find much
In the summer of 2014 and at the end of an exploring trip in the White Mountains of Eastern California, we decided to take a little side trip to a cabin I had heard about. From what scarce history I could find on the place, there didn’t seem to