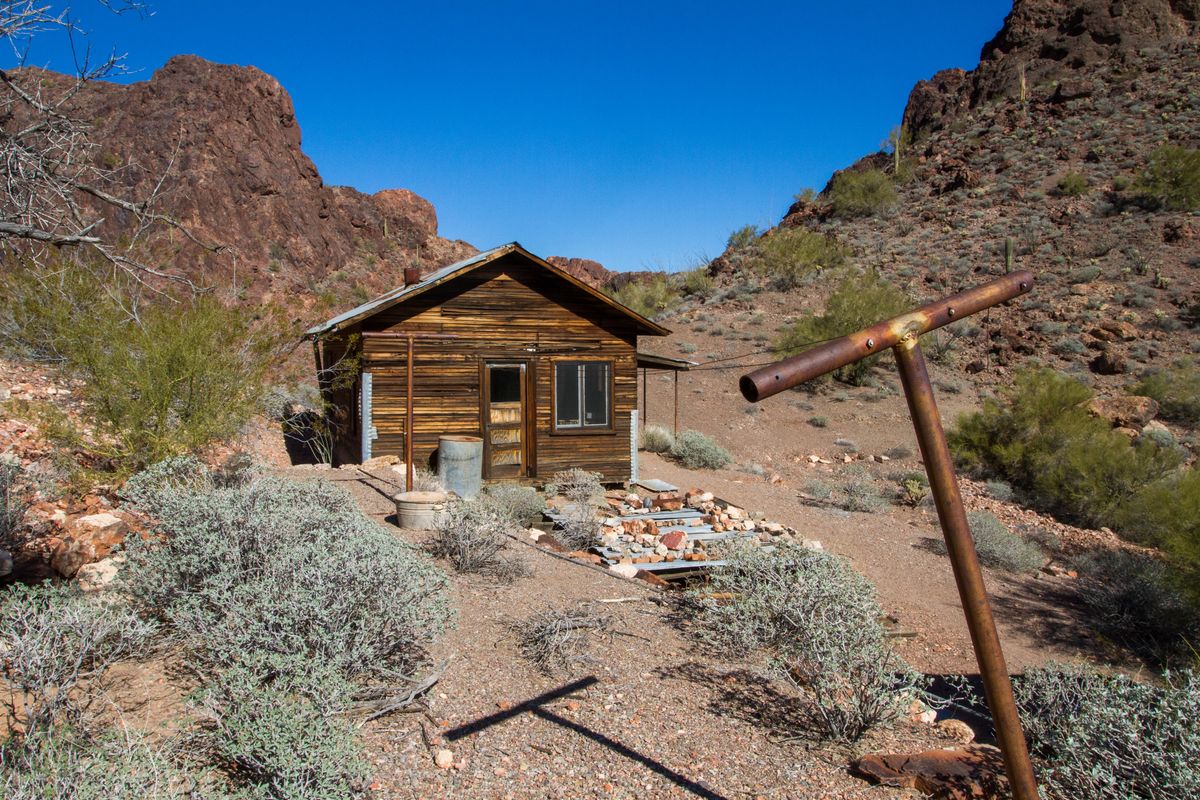 My friend Micah and his family joined us for a fun little trip to the great Sonoran Desert at the start of 2016. Winter is a great time to be in the southern deserts and this time we had our sights set on the Big Eye Mine which is down in the south end of the Kofa National Wildlife Refuge and the Castle Dome Mountains.

A. K. Ketcherside of Yuma discovered the Big Eye mine in 1912. The next five years were good to him. The rich Big Eye quartz vein produced $33,185 worth of gold, silver, and other metals. (That was a good sum of money in the 1910s.) The ore was hauled south to a railroad siding at Roll, Arizona, and then, by rail to the smelters at the American Smelting and Refining Co (ASARCO) in El Paso, Texas. The mining camp had a few cabins, a blacksmith shop, and a mill with a jaw crusher, five stamps, and cyanide tanks.

After the initial glory days, the mine worked intermittently on until the 1950s when it was put in caretaker status. Pauline Taylor (sister of the Yuma County Sheriff at the time) watched over the place until 1983 when she passed away. The main cabin you see today was built in the mid-1910s as a residence for the miners. In 2005, it was carefully stabilized, repaired, and painted by Kofa NWR staff.

Check out my friends, the Dzrtgrls’, great trip report to the Big Eye Mine. For directions and some more history, read Peter Massey’s book "Backcountry Adventures Arizona".

James “Chuckwalla Jim” Wilson discovered a rich gold-bearing outcrop of rock in this canyon in 1901. He called it the El Dorado (also spelled Eldorado). Wilson loaded small batches of ore on burros to be processed over at the mill at Pinyon Well, and all the way to an arrastra
These are two relatively easy mines to reach in the heart of Joshua Tree National Park. It is just a few miles west of the popular Cholla Cactus Garden. History Silver Bell Mine Phil Sullivan (who also worked at the Contact Mine) and Albert Vivian staked the Silver Bell claim
Not far from the Tioga Pass entrance station to Yosemite National Park lie the remains of the Hess Mine, one of the more accessible 1940s-era tungsten mines in the High Sierra. Three widely-separated claims comprised the mine: the main claim at the north end of Steelhead Lake; a small middle