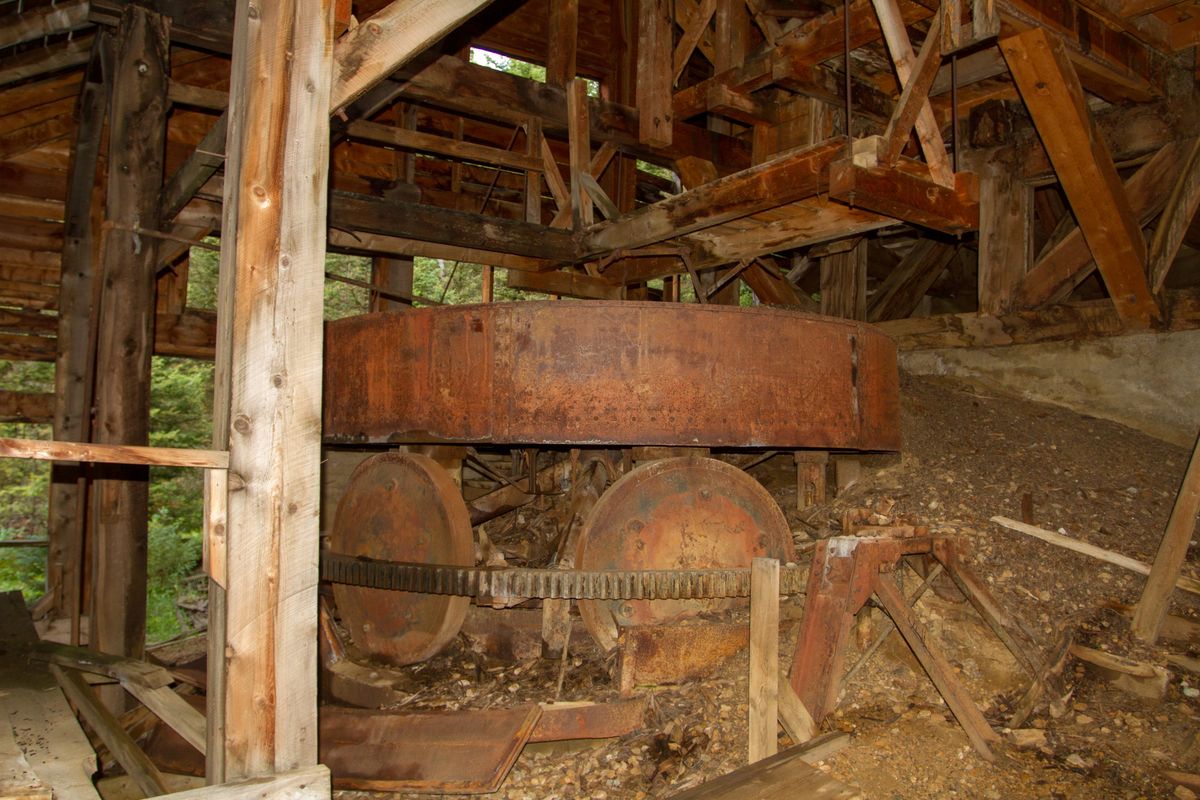 It is rare to find a Chilean mill out in the wild, not to mention one that is ten feet in diameter! The original 10 stamp mill was built on the site sometime before 1910. The mine was already doing well by then and making shipments to the Anaconda smelter in Butte, Montana. It remained a good producer until 1927 when the mill burnt down and the mine closed.

After a few idle years, the mine reopened and the second (and existing) mill was built in 1930 by the newly formed Winnekta Mining Company. The mill was equipped with a 2-stage Ingersoll-Rand Type 20 compressor, Blake jaw crusher, a Lane slow-speed roller (Chilean style) mill with a Whifley concentrating table to catch the fines. The impressive Chilean mill is all that remains today. It is a Lane slow roller mill. The mining camp once had an assay office, boarding house, compressor plant, bunkhouse, and cabins. Fourteen men worked the mine and mill until it closed in 1940.

Underground, the mine had over a thousand feet of workings and stopes, but has since been reclaimed and is currently sealed.

Roller mills are rare. Check out this other roller mill and an even rarer Huntington mill.

During the summer of 2017, we visited a few cabins and mills in Montana. We covered a lot of ground and, while tiring, it was a great trip! I was a bit surprised about how many mill ruins are left. This one, the Forest Rose, is almost completely ruined, but
I couldn’t find much history on this spot. Only that it was worked in 1907 for silver, lead, zinc, and some copper. Reportedly it was an underground hydraulic operation to wash ore out of the vein. That must have been something to see. On the surface, you can see
The Algonquin is an old mine. It was one of the earliest mines in Montana’s Philipsburg district. By 1877, it was being worked by a 10-stamp mill for silver with minor amounts of gold. The mill proved inefficient and a new 20-stamp mill was soon installed. Reportedly, there was