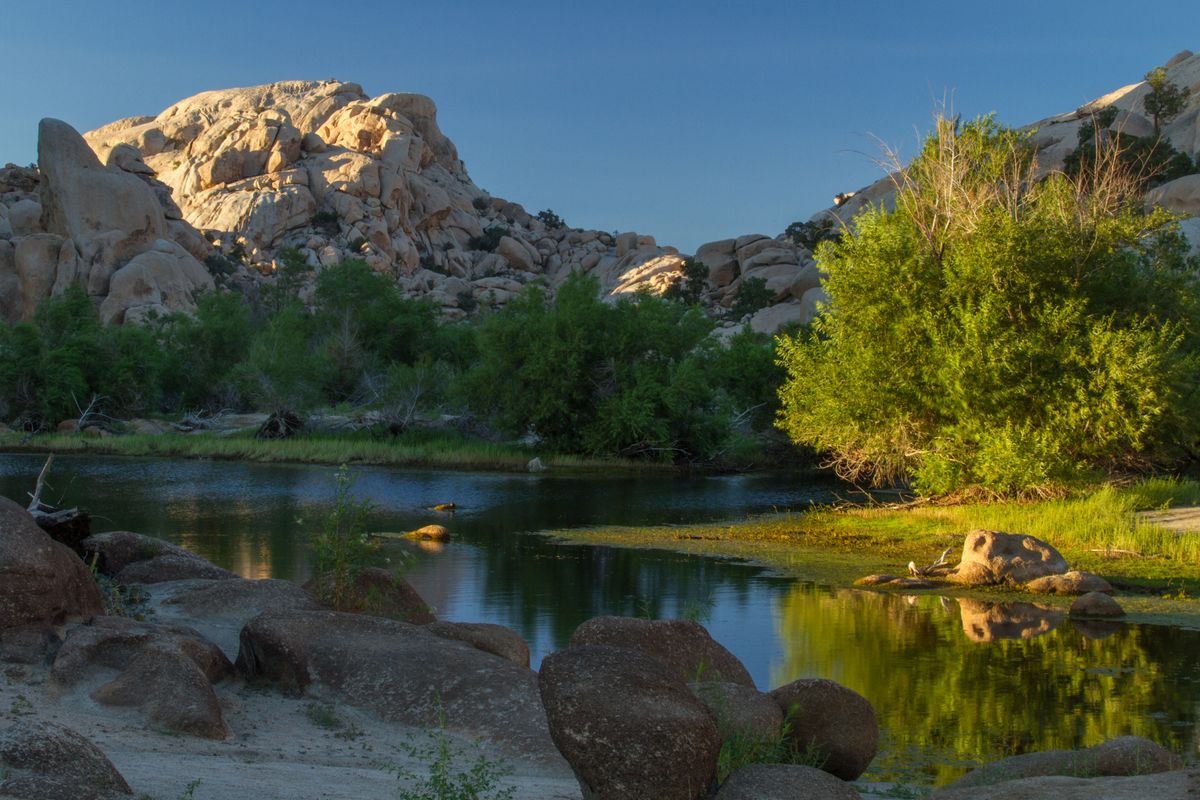 It goes without saying that water is important in the desert and in Joshua Tree that is no different.

A rancher by the name of C.O. Barker built the dam around 1902 to improve the natural tank here for his cattle. Along with the nearby Cow Camp reservoir, it was an important watering hole for cattle and miners alike, who both competed with each other for the water.

Barker and a man named Shay set up camp at Cow Camp in direct competition with Bill Keys for use of the Barker Reservoir. In 1917, Keys added on to the dam in an effort to claim it from the cattlemen. Bill Keys and family built the unusual double-ring water trough below the dam and added six feet to the top of the dam in 1949-50, and renamed it the “Big Horn Dam”.

These days, Barker Dam tends to be well-visited, and it is unlikely you will be alone. However, it is a wonderfully unique place, and the trail is a great one to bring children along and introduce them to Joshua Tree.

The trailhead is at the graded dirt Barker Dam parking lot in Joshua Tree National Park.

From the restroom at the parking lot, follow the trail that heads northwest into the amazing giant granite boulder wilderness of the Wonderland of Rocks. You quickly come to the first trail junction in a sandy wash where the trail begins its loop. I prefer to continue straight to Barker Dam, but you can just as easily make a left here and follow the loop the other way around. The remarkably straight trail continues through an ancient joint in the bedrock that has been eroded away into this small canyon.

Early in the season or after a big rain, there will be water in the pond behind Barker Dam, sometimes quite a bit. It is an important watering hole for wildlife in this area with few other sources of available water. If things are quiet, bighorn sheep will occasionally come down for a twilight drink. Surprisingly, I have seen frogs here too. Shortly after a rain, they will sprout up seemingly out of thin air. Their lifespan is short in this harsh environment. Then they must mate quickly to continue their cycle of life. The pond is a great place to visit at sunset.

The trail can be a little tricky to find from the dam to the second trail junction. It skirts the pond on the left-hand side and scrambles over granite bedrock and boulders. Climb down the rocks keeping the dam on your right. Below the dam are the remains of a double-rim cattle watering trough built by the Keys' family in 1939.

From there, head southwest on flat ground to the second trail junction and then to the "Disney Pictographs". Small informational signs about plants and history are along the trail. This area is known as Piano Flat with Piano Rock out in the middle of the flat.

At the far end of the flat and tucked inside the alcove are a set of artificially painted pictographs known locally as the “Disney Pictographs.” It is reported that these were once a set of authentic petroglyphs, probably of Serrano origin. In 1960, A film crew contracted by Disney for work on the TV episode "Walt Disney Presents: Chico the Misunderstood Coyote", painted over the original faint petroglyphs to be able to see them better and added some of their own for effect. The damage, of course, is irreversible. Never mark or touch rock art. Still, this is an interesting site.

From the Disney Pictographs, head east and follow along the boulder wall (where there is another set of hidden modern petroglyphs) until the trail enters a short canyon and meets up at the first trail junction. Turn right here and head back to the parking lot.

This trail tends to be well-visited, and it is unlikely you will be alone. However, Barker Dam is a wonderfully unique place, and the trail is a great one to bring children along and introduce them to quintessential Joshua Tree.