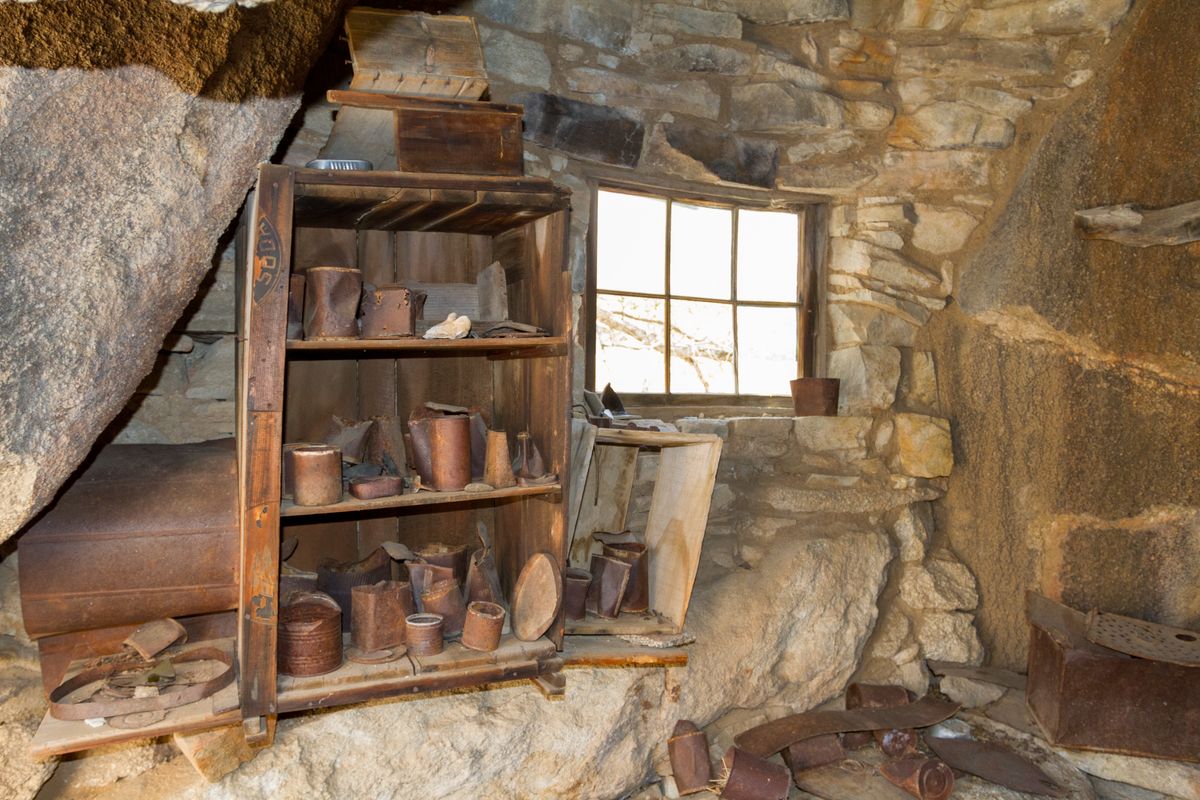 This old trail leads to a couple of historic mines and a hidden rock cabin. This is a must see for Joshua Tree.

The Desert Queen being one of the largest mines in the park also has an equally large history.

Frank James first discovered the rich Desert Queen vein in 1893 while working as a miner over at the Lost Horse Mine. Jim McHaney, a rancher, and part time miner, had a cattle ranch at Cow Camp (which became the McHaney Ranch and eventually the Desert Queen, and Keys Ranch). McHaney learned of the rich lode and legend goes that he and a few other cowboys: Charlie Martin and George Meyers, decided they wanted the Desert Queen mine for themselves. One day, in April 1894, they visited James at his cabin. During an argument over claim, one of the cowboys, Charlie Martin, shot James twice and killed him. Martin claimed self-defense (As he had some knife cuts on him.) He was acquitted at an inquest (conveniently held at the McHaney Ranch) the following year, in April 1894. Jim McHaney, his brother Bill, Martin, and Meyers quickly took control of the mine and began to develop it. Gold ore was hauled over to the two-stamp mill at Pinyon Well (Later relocated to the Wall Street Mill).

In 1895, Jim McHaney purchased a five-stamp mill from the Baker Iron Works of Los Angeles. Which was erected at their Desert Queen Ranch (now known as Keys Ranch), and they continued mining the rich lode. To gain more control over the mine, the McHaney’s paid Martin $47,000 for his share of the mine. They gave George Meyers a herd of cattle for his portion of the mine. Bill gave his sister a share of the mine as well.

Jim, however, squandered his newly found fortune and by 1896 he and his brother Bill were forced out. Controlling ownership of the mine changed hands a few time but by 1902 it was owned by S. F. Zambro, who was a banker from San Bernardino. Zambro and the McHaney's sister (Carrie McHaney Harrinton, who still had a share in the mine) continued to work the mine and, by 1907, the mine had reportedly produced over 3,700 ounces of gold.

In later years, Jim McHaney was convicted of counterfeiting gold coins and spent seven years in federal prison. Bill McHaney ran some cattle and continued prospecting over in Music Valley. He ended up settling in Twentynine Palms.

In 1907, the mine changed hands again and was now owned by William Morgan who invested nearly half a million dollars to develop the mine further (including building the Desert Queen Well near the Wall Street Mill). The new shafts and workings did not find any rich new gold ore, though. Morgan hired Bill Keys around 1910 as mine supervisor. Keys drilled, blasted, assayed, and maintained all the equipment. When the mine became unprofitable, Bill went unpaid for his work. Morgan died in 1915 and Bill became the owner through a property wage settlement soon after. Keys continued to work and lease the mine for periods in 1923, then continuously from 1932 to 1941, and again for short periods until 1961. The mine probably produced another few hundred ounces of gold under Keys’ watch.

Don’t get too excited about trying to get into the mine. Like nearly all the mines in the park, it is gated. I went inside the mine many years ago and it isn’t all that interesting. It is primarily a room and pillar system of tunnels without any long tunnels or shafts. There is no equipment inside.

The Eagle Cliff Mine is a bit more mysterious than the Desert Queen. Discovered by Robert Muir in 1895, a 75-foot shaft was put in following a vein of gold. By 1916, Bill Keys owned it. Some minor production was done by his brother-in-law, Albert Lawton, and a partner in 1933. They milled the ore at Keys’ Wall Street Mill. After that, the mine was only intermittently worked in small batches. It was never a big producer or very profitable. A road was never built up to the mine, so all the ore had to be packed out on mules. Exactly who built the rock cabin and lived there remains unclear. Some sources believe it was Lawton. See below for a description of the cabin.