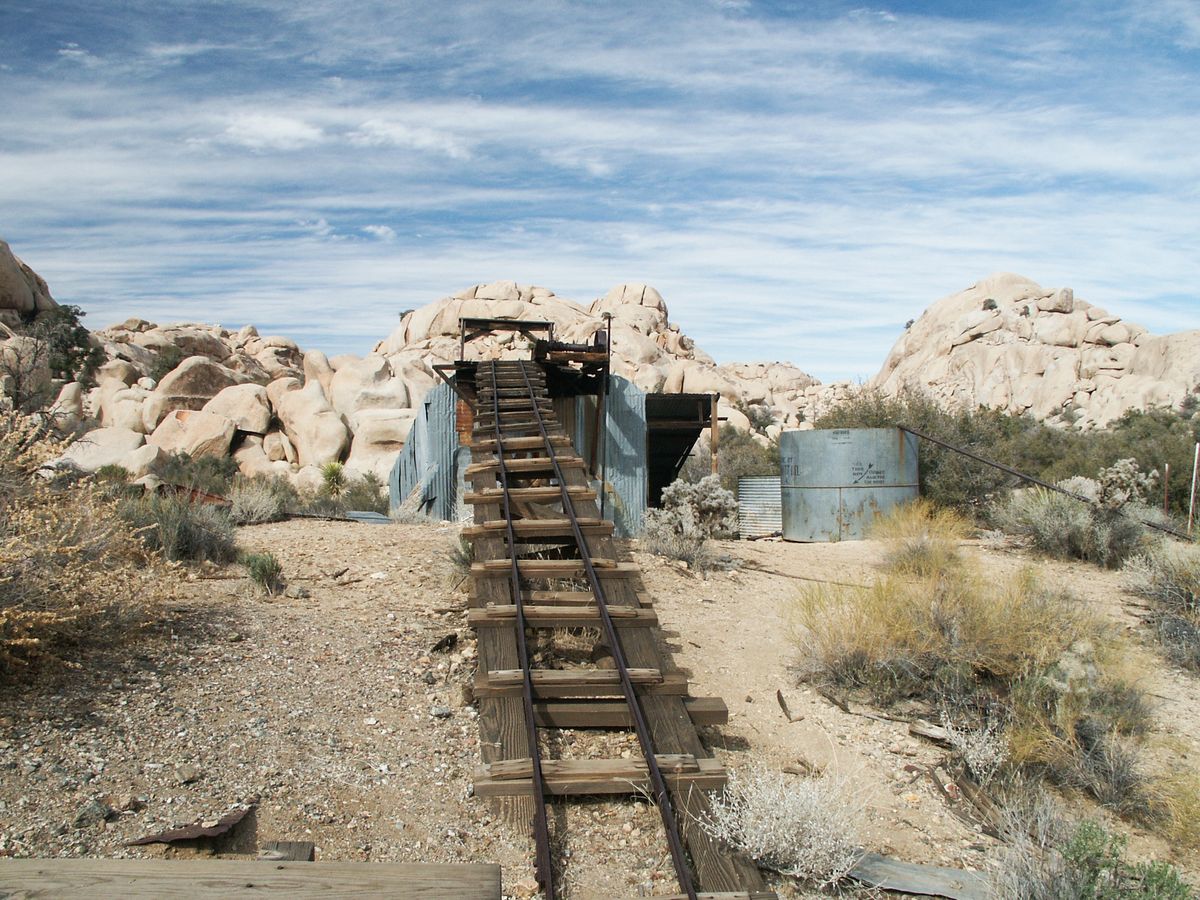 The Wall Street Mill is Joshua Tree National Park’s most intact remaining historic gold stamp mill. Finding a stamp mill like this is rare these days. I’m thankful the NPS has preserved it.

Once owned and operated by renowned prospector and rancher Bill Keys, this two-stamp mill was a custom gold mill. Meaning that he processed gold ore in batches for local mines in the area and took a small percentage from the returns. There was never a mine here.

The mill was originally built over at Pinyon Well (also known as the Pinyon Mountain Mill) in 1891. Keys purchased the stamp mill from New Eldorado Company in 1932 and moved it from Pinyon Well to its current location. He chose this spot because it had a good water source from a hand-dug well next to the mill. The mill includes two stamps made by the Baker Iron Works of Los Angeles, a jaw crusher, and an amalgamation table. A twelve-horsepower Western Gas gasoline engine powered the entire operation.

The mill ran intermittently for years until the outbreak of WWII closed all gold mines as non-essential for the war effort. Bill’s son took over and operated it for a brief time starting in 1949. Bill ran the mill one last time for about a month in 1966. The National Park Service acquired it from the Keys estate in 1971.

On the way to the mill is a windmill known as the Desert Queen Well. Excavated in 1908 by William Morgan. He sunk the well to a depth of 116 feet to reach water for the Desert Queen Mine a few miles off to the east. It did not deliver water to the Wall Street Mill.

Bill Keys has quite a long history around the region, and it is more than I could fit in here. He arrives in the Joshua Tree area around 1910 (Also see the Blackrock Well site where Keys leaves his mark).

One of the more famous stories involves a gun battle between Keys and a man named Worth Bagley. As the story goes, a retired lawman named Bagley moved into a nearby homestead in the late 1930s. An argument developed over access to water at the Wall Street Well next to the mill. After some time, a few of Keys’ cattle were mysteriously shot. Bagley reportedly became obsessed with murdering Keys over access to the water. Finally, in May 1943, they had a confrontation, and Keys shot and killed Bagley at the spot marked along the trail.

Keys stood trial and claimed self-defense against Bagley. The jury convicted him of manslaughter and sent him to San Quentin. He spent five years there before being paroled in 1948 (and eventually pardoned in 1956). Once freed, he immediately returned to his ranch and resumed his old life. Keys died in 1969 and is buried on his Desert Queen Ranch.

The area around the mill has a few other items left over from Keys’ various side projects. Near the mill, an old 1929 Lincoln Phaeton, which was converted into a truck, sits idly rusting away. Directly east of the mill and behind some trees are discards from Bill’s stone carving endeavors. He seemed to enjoy working stone and there is much more blockwork at his ranch.

If you are interested in more history on Bill Keys, consider a ranger-guided tour of Keys Ranch. You can contact Joshua Tree to arrange a tour. Tours are often only available on a seasonal basis and typically cost a small fee ($10 at the time of this writing). Keys Ranch and the surrounding area are otherwise completely off-limits to all public entry to protect the ranch from vandalism.

As always, please leave everything you find in place. It is illegal to remove anything from a National Park.

Drive over to the dirt parking lot for the Wall Street Mill in Joshua Tree National Park. It is just beyond the Barker Dam parking lot. You can also just start from the Barker Dam lot. A trail along a sandy wash connects the two.

The trail follows the old road to the mill northeast just past the restroom in the dirt parking lot. Head northeast towards the windmill. Off to the left are the pink cinder block ruins of the Ohlsone house, an early desert homestead, of which not much remains. A 1920s Dodge truck is nearby.

From the windmill, at the Desert Queen Well the trail turns northward towards the large granite boulders of the Wonderland of Rocks and ends at Joshua Tree’s finest remaining historic gold stamp mill.