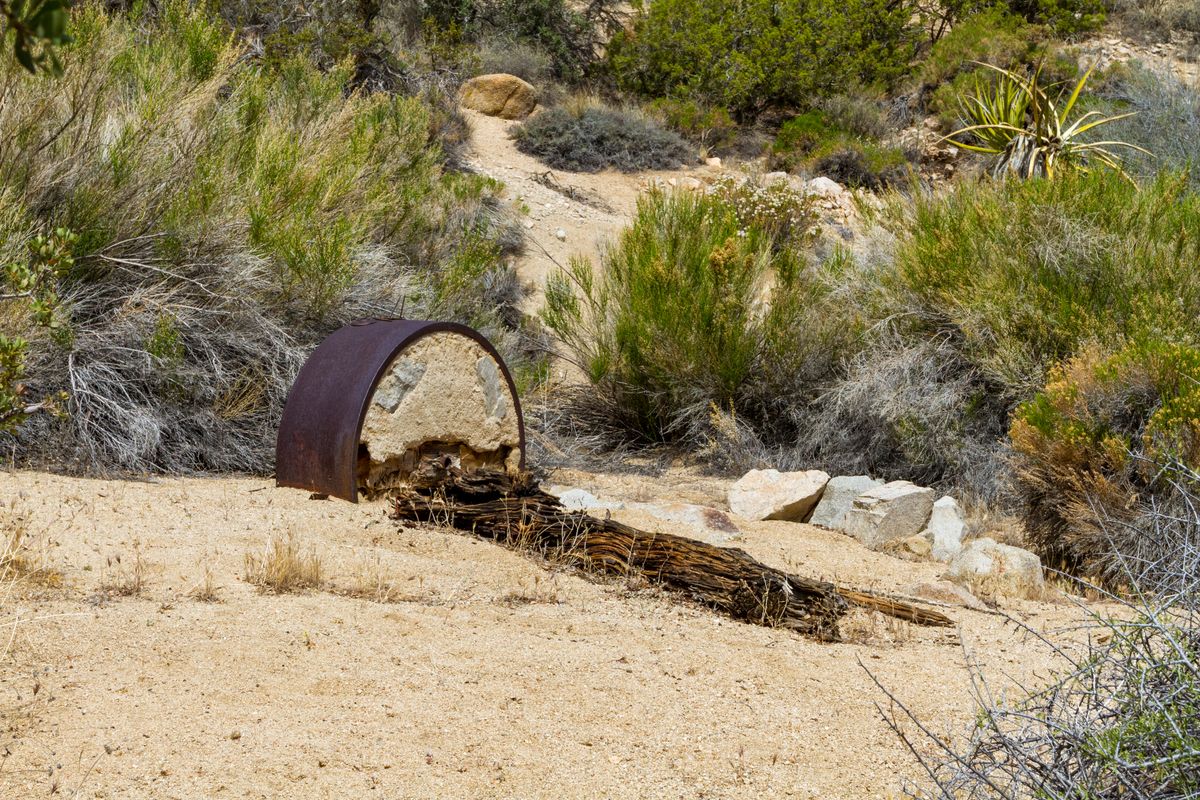 Hensen Well and the Pinyon Mine

This hike is an adventurous cross-country ramble exploring a few historic mining ruins of the seldomly-visited Pinyon Mesa country down the dirt Geology Tour Road in Joshua Tree. Not a lot of people venture out here which is a shame as it is a neat area.

The mines below were at the heart of the long-forgotten Pinyon Mining District, a site of some mining excitement in the 1890s and 1900s.

The first site you will come to on this trek was once the home of a small little mining camp and the Pinyon Mountain Mill. Ed Holland and Alfred Tingman (an early pioneer of Indio) purchased a two-stamp mill from Baker Iron Works in Los Angeles. It was shipped by railroad to Indio, freighted up Pushwalla Canyon, and then installed in 1891.

Interestingly, the mill here was steam-powered. The mill processed ore from Holland and Tingman’s own Pinyon Mine (see below) and did some custom runs for other surrounding mines. Ore even came all the way from the Desert Queen Mine for a brief period of time to be crushed here as well.

By 1918, the camp, which contained a couple of cabins and a windmill, was abandoned. Today, not much remains beyond a few concrete cisterns and foundations. Bill Keys moved the mill to his Wall Street Mill in 1932.

Higher up the mountain is the site of the Henson Well and Mill. I couldn't find the well in the brush but I did find the remains of the Chilean mill. A Chilean mill is a type of arrastra with two vertical grinding wheels for crushing rock. In this case, the wheels are made from concrete and banded in iron.

The mill likely did custom runs for surrounding mines. The wheels have been scattered by floods and time. One is hidden in the brush and another is buried in the sand. Look around to find them.

The Pinyon Mine, also known as the Pinyon Mountain Mine, was discovered by Ed Holland and Alfred Tingman. Gold ore was brought down the mountain and crushed at their two-stamp Pinyon Mountain Mill. The mine dumps suggest that this was the largest mine in the area but production is unknown.

Also known as the Hansen Mine, Holland and Tingman probably owned this gold mine as well and worked it at the same time as the Pinyon Mine but little is known about it. The masonry wall and foundations suggest a mill was here or at least planned for the future. Whether a mill was ever built remains a mystery. It is more likely Holland and Tingman relocated a mill to Pinyon Well for a better water supply.

By 1960, Bill Keys owned the mine but probably didn’t work it. If there was any equipment here Keys likely relocated it to his Desert Queen Ranch. Production from this mine is unknown but it is not likely to be much.

As you can see from all of the above, Ed Holland and Alfred Tingman were busy fellows in this little corner of Joshua Tree but they were involved elsewhere as well. See the Hexahedron Mine and the Lost Horse Mine for more on their mining ventures.