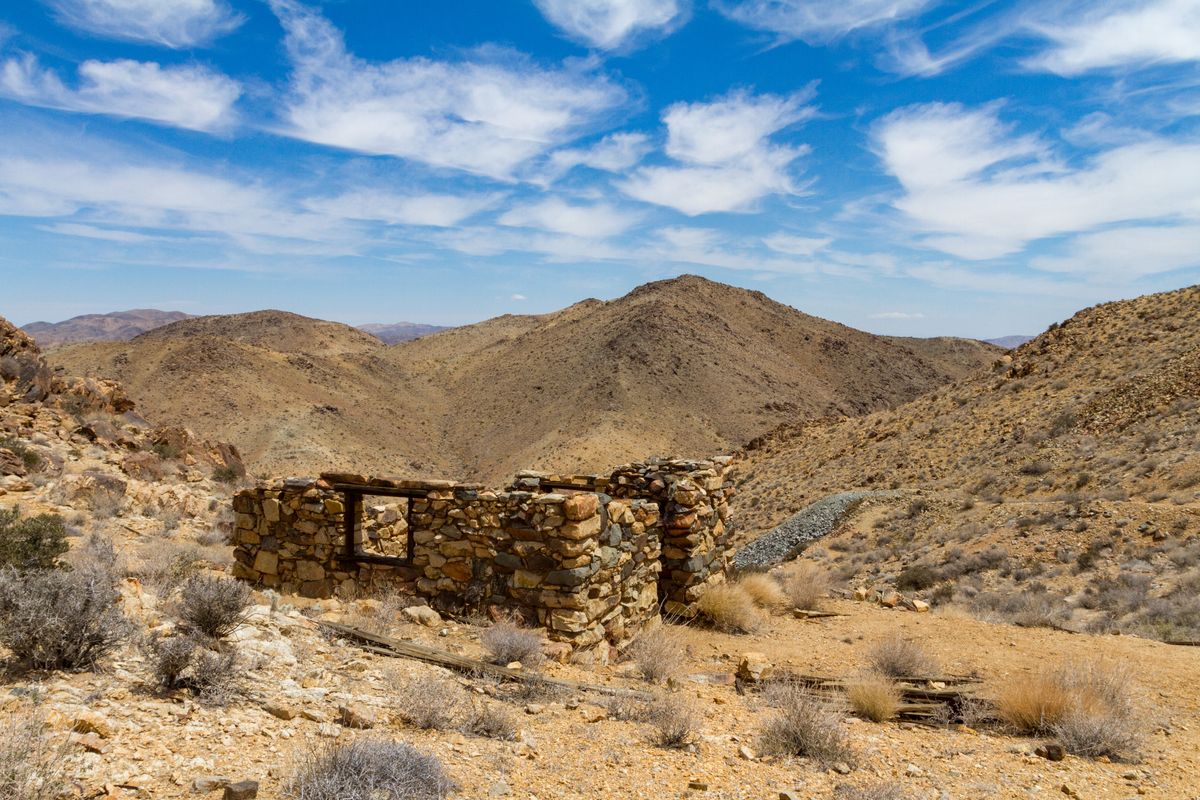 Sometime before 1894, Al Tingman ("The Father of Indio") and Ed Holland (of Lost Horse Mine fame) staked claims on some rich gold ore samples high above Pleasant Valley. They sold the mine to Bill and John Garrison who formed the Hexahedron Mining Company. The Company dug a well but found little water. They also built a five stamp mill, called the Hexie mill, on-site but apparently, it wasn’t very successful either. Probably due to the lack of water. This caused most of the ore from the mine to be hauled over to the mill at the New El Dorado mine on the other side of the mountain. A road once connected them through Fried Liver Wash. The Hexie stamp mill was dismantled by 1929.

At the trailhead are the remains of the Gold Coin Mine, of which not much is known. It was worked intermittently and was first operated in the early 1900s by the German-American Mining and Milling Company. Water was hauled over from Pinyon Well (to the south). By 1929, the mine was being worked again and was owned by a F. C. Longnecker of Los Angeles. The mine never produced much and had closed down by 1933. It had some small prospects and a 100 ft shaft, which is now caved.

The trailhead is at the Pleasant Valley Backcountry board. To get there, go south on Geology Tour Road off Park Blvd. (It is 1.6 miles west of Jumbo Rocks Campground or 6.5 miles west of Hidden Valley.) Drive down the graded dirt Geology Tour road 6.9 miles to the Pleasant Valley Backcountry board and park there. The road is marked one-way past Paac Kü̱vü̱hü̱’k (formerly known as Squaw Tank. Which means "place of temporary water" in Serrano) and can be rough around the loop to exit. Also at the trailhead are the ruins of the Gold Coin Mine. The Pleasant Valley playa is off to the south.

The trail isn’t obvious from the trailhead but walk east past the backcountry board across the sandy flat. You should pick up the old road to the Hexahedron Mine that lies at the foot of the Hexie Mountains and the northern edge of the dry lake. If you don’t find it immediately, don’t worry, just continue east across the flats. You should come across it if you stay close to the hills. It is a flat 2.7 miles out to the site of an old mine camp at the foot of the mountain.

As you get close to the old mine camp, you will notice a small hill detached from the mountains directly ahead. That is your first sign you are getting close to the mine camp and where the old road heads up to the mine. Just off the trail, I came across what appears to be a monitoring well next to the wash (33.91673°, -116.01338°). I'm not sure on its purpose.

Continuing on to the base of the hill, the road crosses the wash and you will pass through an old iron fence and gate. The road up to the mine will be obvious now, but instead of cutting over to it, continue on the road up the slight hill to the flat where the mine camp used to be. Nothing remains except for a few Hole-in-Cap and more modern cans. From here, the road goes directly up the mountain to the mine. It is a 750 ft climb to the top. Take your time. In places, the old mining road is nothing more than a bulldozer scrape cut into the Precambrian gneiss that makes up most of these mountains. It must have been quite a thrill to drive up this!

If you are up here in early May, you might catch the pink blooms of the Hedgehog cactus (Echinocereus engelmannii) that dot the slopes.

As you get higher up, the views of Pleasant Valley become expansive. Once on the ridge, you can see the Blue Cut on the far side of the valley. On a clear day, you can see Mt. San Jacinto directly above the Cut some forty miles away. Created by the Blue Cut Fault, I assume the name Blue Cut comes from the bluish-gray granodiorite in the pass. The geologic feature is sure more distinctive up here.

Once at the top, the mine road runs along the ridge and between small peaks over to the mine. In places, the road is made from stacked rocks. The labor it took to build it is a testament to the lure of gold in this waterless and empty desert. You won’t see the remains of the miner’s small roofless rock cabin until you are upon it at the mine. What a place this must have been to live at. Take a moment to admire its view.

James “Chuckwalla Jim” Wilson discovered a rich gold-bearing outcrop of rock in this canyon in 1901. He called it the El Dorado (also spelled Eldorado). Wilson loaded small batches of ore on burros to be processed over at the mill at Pinyon Well, and all the way to an arrastra
These are two relatively easy mines to reach in the heart of Joshua Tree National Park. It is just a few miles west of the popular Cholla Cactus Garden. History Silver Bell Mine Phil Sullivan (who also worked at the Contact Mine) and Albert Vivian staked the Silver Bell claim
Not far from the Tioga Pass entrance station to Yosemite National Park lie the remains of the Hess Mine, one of the more accessible 1940s-era tungsten mines in the High Sierra. Three widely-separated claims comprised the mine: the main claim at the north end of Steelhead Lake; a small middle