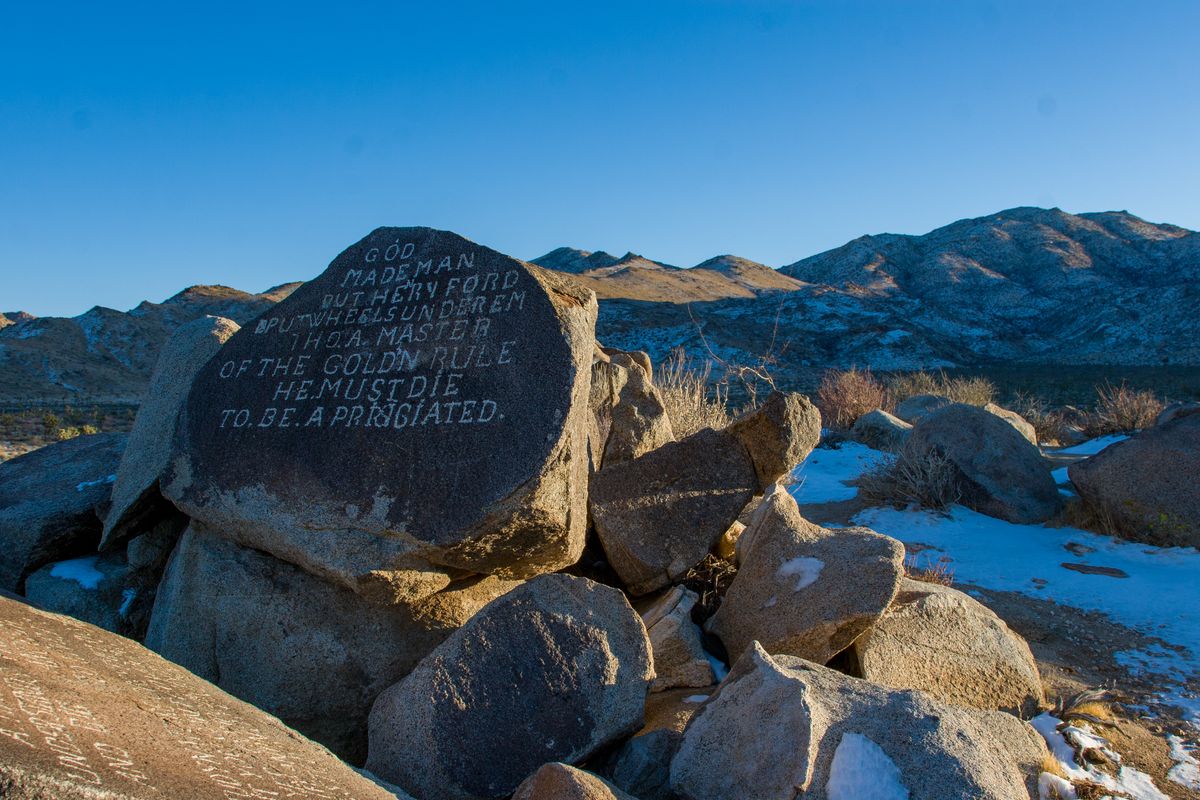 Samuelson’s Rocks was once the homestead of a Swedish man named Johann (or John) Samuelson who came out here in the around 1926. He must have had some time on his hands because some of the rocks here have 1930s Depression era political and naturalistic commentary. Search all around the hill as there are quite a few inscriptions. See how many you can find; I counted seven. It must have taken some time (and dedication) to carve his beliefs on these rocks.

One of them reads:

The Rock. Of Faiht. And Truht. Nature is God. The Key to Life is Contact. Evolution is the Mother and Father of Mankind. Without them we be nothing. – John Samuelson. 1927.

The milk of human kindness ain’t got thick cream on it for all of us. Ask Hoover.

Being from Sweden, I’m guessing English wasn’t Mr. Samuelson’s first language. Many of the inscriptions have spelling errors, but keep in mind, dictionaries would be scarce in remote mining districts at the time.

How exactly Samuelson got to Joshua Tree remains a bit of a mystery. Some stories suggest he was a sailor. I couldn’t find enough evidence to confirm that. Samuelson was working for Bill Keys out at the Desert Queen Mine in 1928. By the 1930s, he worked the Hidden Gold Mine below Keys View.

At the hillside, the faint trace of a hand-stacked rock road climbs to the up the hill where a metal bed frame remains. On the far western side of the rocks is the remains of a small corral. The top of the hill makes a relaxing place to rest for a while. This is a peaceful spot with a pleasant view. I can see why Samuelson chose it.

Off to the east is what I believe is Samuelson's homestead ruin. It is worth a detour to explore. Samuelson filed for a homestead here but was denied since he wasn't a citizen. He left the area soon after.